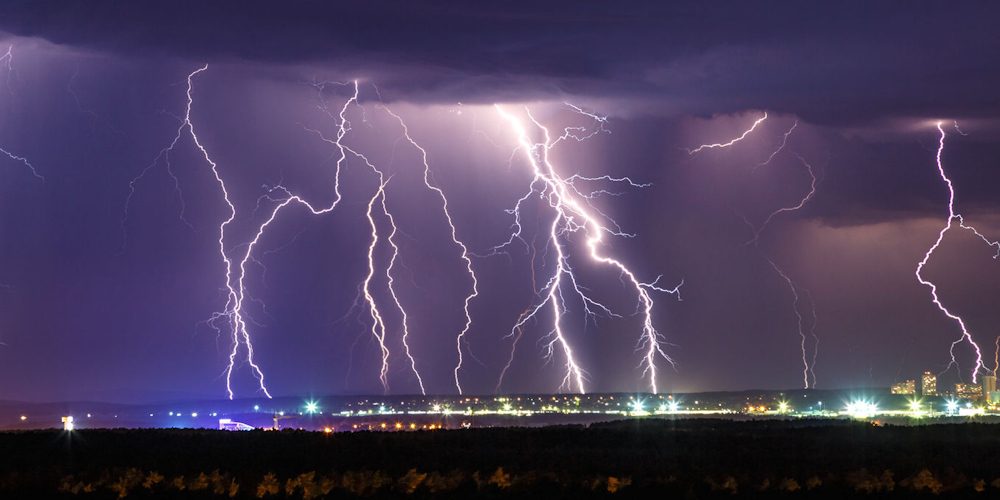 Lightning is one of nature’s most impressive phenomena. The average lightning bolt transmits enough energy to keep a 100-watt light bulb burning for more than three months. Lightning strikes produce temperatures up to 50,000° – five times as hot as the surface of the sun.

Lightning is as deadly as it is beautiful. Every year, lightning kills approximately 70 people in the United States and more than 2,000 around the world. Many more receive serious injuries from direct or indirect lightning strikes. In many cases, survivors experience permanent physical or neurological damage.

Between 2004 and 2013, the National Lightning Detection Network measured an average of 535,834 lightning strikes per year in Kentucky. That’s over 1,400 a day. The National Weather Service ranks Kentucky 15th in lightning-related deaths, with 8 recorded between 2003 and 2012. All thunderstorms produce lightning – but not just where it’s raining. Lightning can strike 10 miles from areas of rainfall. Electricity from a lightning strike can arc along the ground as far as 60 feet from the point of impact (or from the location where a lightning rod’s grounding point enters the earth).

Lightning is attracted to height, pointy shapes, and isolation – not metal. Metal, however, does conduct electricity, so lightning that strikes a metal object will pass through it and into the ground. This is why most cars (but not convertibles!) are relatively safe refuges from lightning, as the electricity flows through the car’s metal frame and into the ground without entering the passenger compartment.

While the greatest risk of lightning comes while a storm system is directly overhead, lightning strikes can both precede the storm and continue after it passes. A storm can product lightning up to 30 minutes after audible thunder ends.

As with a great many other hazards, situational awareness is one of your best defenses. Before engaging in outdoor activities, check the weather forecast for thunderstorms, and consider adding a portable radio to your golf bag, tackle box, backpack, or other outdoor equipment. If you are in charge of a scheduled outdoor activity, have a severe weather plan and be able to contact all your participants to advise them of a cancellation.

While outside, pay attention to darkening skies, strong winds, or flashes of cloud-to-cloud lightning as potential indicators of an approaching thunderstorm. Know the location of the nearest shelter and how long it will take you to get there.

If thunderstorms are likely or in progress, avoid high places, open fields, and open structures like gazebos, picnic shelters, and bleachers. Stay away from tall or long objects like trees, flagpoles, communication towers, utility poles, antennas, and fences. Also avoid bodies of water.

Sound travels at about 760 miles per hour – or 6.3 miles per second. If you see a lightning flash and hear the thunder less than 30 seconds later, you’re dangerously close to the storm that produced the lightning. Take shelter immediately.

The best shelter from lightning is a permanent structure (one with wiring and plumbing – not a tent or shed). An enclosed vehicle is also acceptable protection as long as you don’t touch any metal surfaces. While indoors, avoid using the computer or land-line telephone. Unplug electronic devices.

More lightning science, as well as data on other atmospheric phenomena, is available through the Lightning Team at NASA’s Global Hydrology and Climate Center.