No shovels or dirt were necessary today as Mayor Jim Gray and city officials “broke ground” on a new Public Safety Operations Center at the former juvenile detention center on Cisco Road.

“By rehabbing an existing space, we’re able to get all the value and functionality of a new building while saving $26 million in construction costs,” Gray said. “The Public Safety Operations Center will bring city divisions that communicate directly with citizens daily and during emergencies – the divisions of Emergency Management, Enhanced 911 and LexCall – under one roof. This increased efficiency and coordination will improve the city’s ability to respond to citizens’ requests and concerns.”

The 33,000 square-foot building first opened in 1982 and closed in 2005, when the state took over operation of the juvenile detention system.
The new building is a big step forward for Emergency Management. “During past emergencies, the City has had to rush to locate critical equipment and personnel in a temporary emergency operations center. The new facility will make that transition seamless,” said Emergency Management Director Pat Dugger. “We’ll have plenty of room for elected officials and stakeholders to work together as a team, and for media partners to get regular briefings during emergency events.”

Because the building was originally designed as a jail, it can withstand power outages and damage from natural or man-made disasters. The Center will feature new fortified windows and state-of-the-art telecommunications technology.

For the Division of Enhanced 911, the Center will allow dispatchers to provide radio communications for first responders out of a single facility. E-911 currently operates out of Police Headquarters on Main Street, and has a separate dispatch center at Fire Headquarters on Third Street.
“By merging the dispatch personnel into one center, public safety agencies will be able to better serve the citizens of Lexington by eliminating the need to transfer calls between the two centers we currently occupy,” said E-911 Director Robert Stack.

LexCall Manager Pat Tatum said her division is looking forward to moving to the Public Safety Operations Center. “As the centralized call center for Lexington, we initiate hundreds of requests for city services each week,” Tatum said. “In addition, by relocating to the new center, we will be the link between emergency response providers and citizens who need assistance or information during an emergency.”

Efforts to build the Center have been several years in the making. In 2008, the project stalled when construction estimates ballooned to more than $39 million. The current budget to build and equip the building is less than a third of that at $12.3 million. The new facility will result in additional savings through shared utilities and reduced rental costs.
“We always recognized the need for a central operations site, and this project meets that need in a responsible way,” Gray said.

Funding for the Center comes from city bonds and a $3 million grant from the Federal Emergency Management Agency through the Chemical Stockpile Emergency Preparedness Program. The project’s architecture firm is Murphy Graves Trimble and Churchill McGee is the general contractor.

The PSOC is expected to be fully operation by early Summer 2016.

Watch the video of the groundbreaking event

More in About DEM 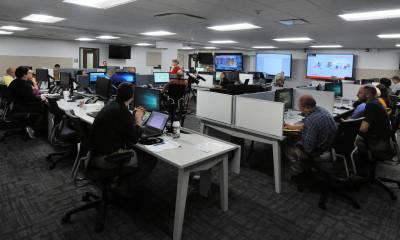